A lyrics intervention--Train does it again 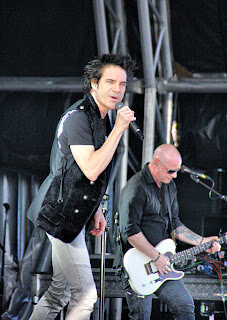 (To see the five contending songs for last years award, you can follow this link: http://janette-rallison.blogspot.com/2011/04/vote-for-worst-song-pick-up-lines_26.html


This year, Train won hands down (or wheels down, since we are talking about a vehicle) for it's song Drive By.

In it, lead singer Patrick Monahan sounds like he's stalking some unfortunate woman who's greatest desire is to flee from him. She moves across the country (or at least tells him she does) in order to get away from him. Sadly, he still doesn't get the hint.  And then there is the touching chorus where he proclaims that he is just a "shy guy looking for a two-ply Hefty bag to hold my love."

Yeah, it's always the quiet ones that you don't suspect who end up being led away by the police in handcuffs after the grisly remains are found in their basement.

So in a clear attempt to redeem themselves from the I'm-not-a-danger-to-society category, Train has come up with another song called Fifty Ways to Say Goodbye.  (Catchy song, by the way. I frequently hum it.)

For Pat, saying goodbye entails coming up with fifty imaginative ways to say his girlfriend died.  Here's a sample:


She went down in an airplane
Fried getting suntanned
Fell in a cement mixer full of quicksand
Help me, help me, I'm no good at goodbyes!
She met a shark under water
Fell and no one caught her
I returned everything I ever bought her
Help me, help me, I'm all out of lies
And ways to say you died

Yes, Patrick, I think we can all agree that you are no good at goodbyes.  Most people go with, "Let's just be friends." It's a little less violent.

Note to any women who are interested in Train band members: Don't. Just don't even go there. It will not end well.

Note to the Feds: Check the Hefty bags. That's where he keeps his love.

Note to people who don't know me: I'm just joking about all of this.

Note to Patrick: Seriously, I love you . . . so you don't ever need to like, um, come looking for me.


Posted by Janette Rallison at 9:38 AM

Come on. Where's the sense of humor? The lyrics aren't serious and they shouldn't be taken seriously. Just because you don't like or get them doesn't bake them bad.

Perhaps the most disturbing part of that video was the Hoff. Dang he's gotten old.

I will now have that song stuck in my head for the rest of the day. Thank you very much ;)

Oh, also - Heecaroo? I think it's funny you're calling someone out for not having a sense of humor when you read this post entirely without the sense of humor Janette intended ... Just sayin'.

Ha ha ha. Too funny. I actually like Train, but their lyrics are pretty weird :)

Both songs might be weird, but at least it's done in humor. Bruno Mars "Marry You" is basically about wanting to marry a girl because he is drunk. And if the next day they don't like it - BOOM, divorce. NOT ROMANTIC AT ALL!!(on a sidenote I do love Bruno Mars's songs...most of them!)

Heecaroo, actually the song is one of my favorites on the radio right now. I never said I didn't like it. I love Pat . . . and want him to stay far away from me. (Just kidding about that too!)

Janice, if I ever do a music video, I think David Hasslehoff should be in it.

Tiana, thanks for explaining the humorous nature of my blogs to new readers. I added a disclaimer on the blog for other newbies.

Dena, yes--but at least Train has yet to write a song with the lyrics, "Tonight, yeah baby. Tonight, yeah baby." Still wondering why Lady Gaga didn't pay a few bucks more and get a writer to help with that song.

Escape2Books, I'm sure Bruno Mars will be nominated for many Enrique Awards.

I have not heard this song. Obvously I have earplugs, in or my head stuck in the sand, or I'm listening to too much NPR. I'll have to fix that.

I love that song. .. and the lyrics just make me laugh, every time. I have a running joke with my roommates that if I ever have a boyfriend and we break up, that when people ask what happened, I'll use one of those lines, and also request that he do the same ;)

I think it might be time to change the name of the award to "train" wrecks.....:)

Okay, I hadn't heard this one before, and I just laughed my butt off!! LOVE it!

I agree with Janice though - whats with Hoff showing up everywhere these days? We love you David!

ES Ivy, you apparently don't have teens who set your radio dials. I will send you some.

Allarednic, use the line about the tanning bed accident. It will make your boyfriend seem vain. (Do guys use those?)

Wendy, yep there's just something dang funny about seeing Hoff at the produce department discussing the tomatoes. I never run into stars in my grocery store.

HOLY GUACAMOLE as soon as i started reading this post, a song by Train came on the radio. (hey, soul sister)
coincidence? probably not. The radio DJs are watching.

I love your blog, I'm curretnly short of time but i would have loved to read all of them if i had the chance. Your witty remarks are astounding and would have me laughing hysterically but unfortunatley my walls are paper thin and my residents would hear me resulting in a lound banging on the wall. i havn't heard their new song yet (not the drive by one ) everyone in the world has heard that, mostly cas it's in the top charts.

You should know you have a big fan at http://www.readmyprint.blogspot.com/

The author just gave you a "favorite blog award" on her latest post:)

You should know you have a big fan over at Read My Print who just gave you a "best author blog" award.
http://www.readmyprint.blogspot.com/

Natalie, Train has eyes everywhere. That's why you have to tell them you're moving across the nation in order to get away from them.

Read all about it, Thanks! But it's okay to laugh out loud in your apartment. Let the neighbors wonder what's going on.

Carrie, Emily, and Carrie, thanks for letting me know about Read My Print's blog. That was so awesome!

I love both these songs...such fun, crazy lyrics!

I laughed so hard I cried a little and had a hard time explaining it to my husband! I didn't know what he was saying! Now I have to keep from hysterically laughing every morning I hear that song at school when the elementary kiddos are walking around in the gym!