Which cover picture do you like best--new photo added

I have a romance novella that I'll be putting up on Amazon soon. Possible title: Long Time (and at one point illegal) Crush I need a cover. So I've been looking at pictures of hot guys on Shutterstock (It's a dirty job, but somebody's got to do it.) and now I want your opinion. 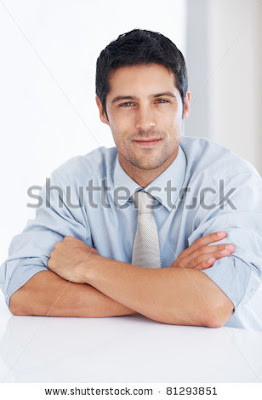 Kye, the hero, is a guy who's family owns a large ranch in Montana. When his father had an injury, Kye changed his plans from being an engineer to being a high school math teacher so he can help out on the ranch. 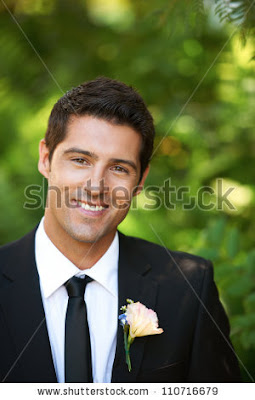 We see him in a cowboy hat, in his school teacher duds, and in a tuxedo as best man at the heroine's brother's wedding. You would think it would be easy to find pictures of a hot guy in a cowboy hat--and it is--except that none of the pictures seemed appropriate for one of my stories. According to Shutterstock, cowboys wear very little clothing. Apparently something in their job requires them to walk around shirtless, with glistening abbs. (I sooo should have been a cowgirl.) 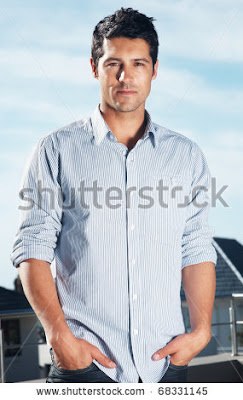 Let me know which picture you think would make readers look twice. (Oh, and by the way, the guy is age 24 and then 27 in the story.) 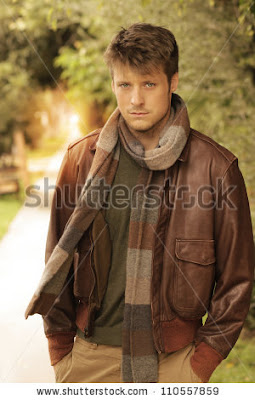 ***news flash**** I have a new contender in the hot guy cover category. A friend pointed out this awesome photo by photographer Rob Lang. I emailed him and asked for permission to use it on the blog so you, my dear readers, could vote on it. Keep in mind that even though you may want to copy said photo and wallpaper your bathroom with it (who wouldn't, after all) it's copyrighted and a flurry of lawyers will pounce on you should you press the "save image" button.

It's that special time of year when random companies send me their catalogs. I don't know why anyone thinks I might want to buy Meerkat statues, dancing pigs, or dress-able squirrel magnets, but apparently I fit the demographic, because the catalogs keep showing up. Of course, even the stores have their share of creepy Christmas presents.  Here's my top pick of things you probably won't want to receive this Christmas. (If you're afraid any of your relatives might send you these things, do yourself a favor and email them the blog link.)

First off, let's talk about Dora the Explorer--that charming little girl who wanders the countryside, constantly lost.  Last year I was creeped out to see the Dora Pillow Pet because it looks like some horrible species-cross-breeding experiment that went horribly wrong.  (When did people become pets?)

Do not ask what Dora is doing with those Winnie the Pooh Pillow pets. You don't want to know. 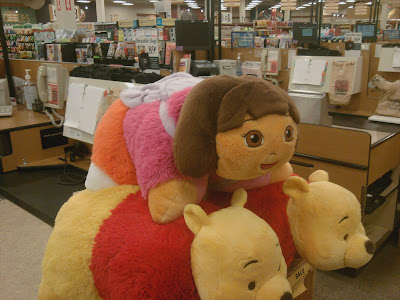 I had high hopes that Dora would be back to her normal winsome self this year. Alas, it was not to be. I walked by a store and saw this. 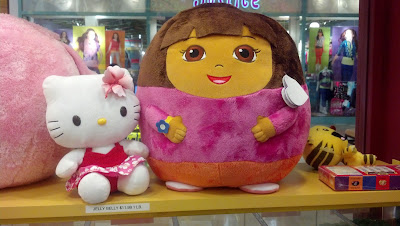 If I were Hello Kitty, I'd be nervous. Apparently Dora ate her last sidekick.

Dora's new "husky" size  made me wonder about the obesity problem here in the US. Why are we so overweight?  And then I saw these next Christmas ornaments. 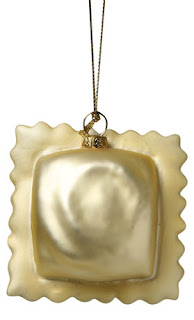 Since when did  Christmas trees start doubling as snack bars? How food obsessed are we as a nation that we think strips of raw meet are a good decorating medium?

Okay, enough talk about obesity. In the last week, I have eaten far too many sugar cookies, gingerbread men, and brownies  to get up on a soapbox about junk food. (And okay, I did just buy a cupcake ornament--but it was cute.)

Speaking of Christmas decorations, here's a two-story tall blow up Santa. Nothing will thrill junior quite as much as a Santa the same size as King Kong.  I mean, that's not going to cause any nightmares. The reason Santa knows when you're sleeping and knows when you're awake is because he can look right into your bedroom window. And he does . . . 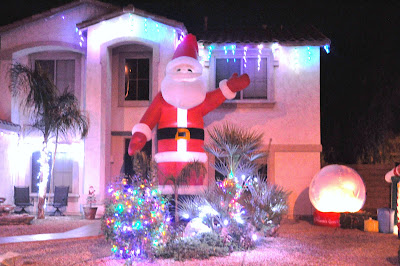 What do you get the person who has everything? How about a horse head mask? I mean, how many times have you been walking around your house wishing you could slip into something a little more equine?  I love how the horse looks startled--like he's just watched the decapitated horse head scene from the Godfather. 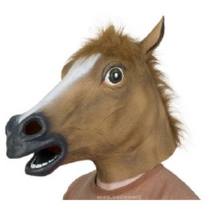 Sometimes I think certain gift ideas must have come about after drunken parties in the marketing department. Marketeers were clearly trying to outdo each other by finding the absolutely stupidest objects they could make people in third world sweatshops produce. This mounted squirrel head (only 24.95) is not only sold by Wireless, it's on the cover of their catalog. Yep, the flagship of gifts, the hot item this year--a fake, dead, half a squirrel. Personally, I'd expect a real, dead, half a squirrel for that much money. 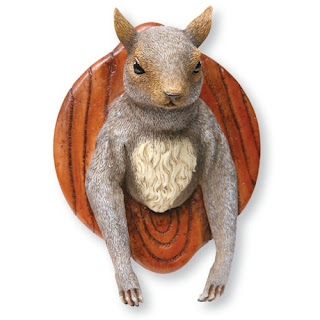 Just kidding! Lest I get angry comments about my inhumanity toward fake or real squirrels, let me emphasize that I love animals as much as the next person--in fact, arguably more, since I have so many cats I have been accused on more than one occasion of hoarding them. (The strays come and refuse to leave. It's really not my fault.)  However, even I--animal lover that I am--found these next shirts creepy. 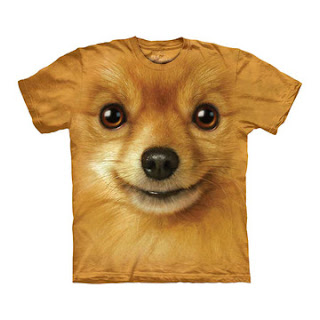 Remember the scene from Alien when an alien popped out of somebody's stomach? Yeah, that's pretty much the impression you'll give people if you wear this shirt.  And the cat shirt--is it just me or does the cat look like it's just as horrified by this fashion choice as everyone else? 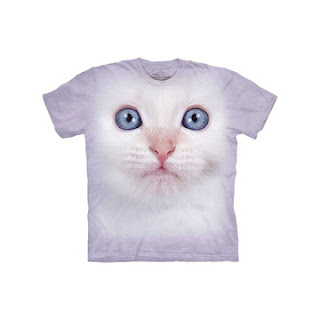 Lastly, for a mere 109.95 you can buy a two and a half foot tall Green Thumb garden statue. 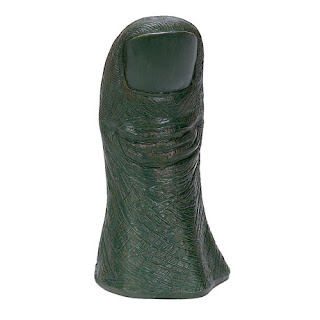 All I can say about it is: Well, at least it's not the middle finger. That, I suppose, would really be more of a statement to your home owners association than an actual Christmas gift.

Sadly, there are many, many more tacky gifts where these came from.

If you want a great gift--and one that's a lot less than 109.95, try one of my books. I promise it will give you more enjoyment than half a squirrel or a gigantic, severed garden thumb.

If you're into romantic comedies about women who work for hot, single movie stars: 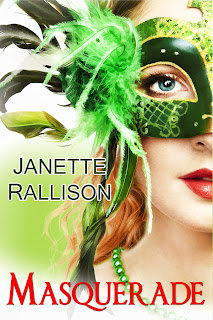 If you'd like to see past years creepy gifts, you can check them out here:

http://janette-rallison.blogspot.com/2012/01/creepiest-kids-toys.html
Posted by Janette Rallison at 12:53 AM 16 comments:

So send me your address (or the address where you want the book to go) at jrallisonfans at yahoo dot com and I'll mail it off.
Posted by Janette Rallison at 10:16 PM No comments:

You know what would be a perfect Christmas gift (besides my books, that is)? This awesome book of failed family mottos.  You know those samplers and plaques with uplifting, motivational saying that you frequently see in peoples homes?  These are the ones that didn't make it.  Here are a few samples from the book: 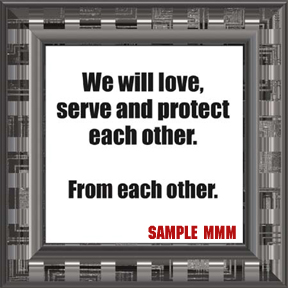 See, you can tell the author had lots of boys. (Four, I believe.) 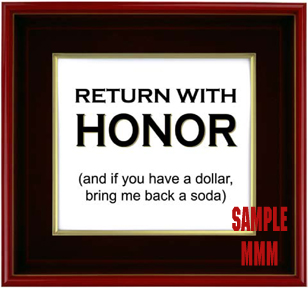 I actually have a Return With Honor plaque hanging in my house. Now I will think of this one when I see it. 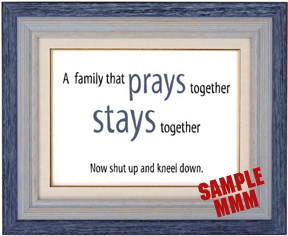 This is frequently how our family prayers at our house go. Sigh.

For a chance to win this book, leave a comment about your family's motto (failed or otherwise) I'll choose a winner on Sunday and mail the book out on Monday so that hopefully it will get to you or your loved one by Christmas.

Or if you'd rather just pay the 7.95 and order the book, here's a link to the website so you can do that:

You'll see the book in the right hand corner. Click on it for buying info.

I'm deep in revisions, so today my commentary on the Bad Boy phenomena is going to be this very funny music video, called Nice Guys.

The first lines are:
Nice guys finish last,
that's why I'll treat you like trash.
It's not what I really want to do,
but you only date bad guys,
so I'll give it my best try
to treat you the way you want me to.

It's funny because there's a grain of truth to it. I mean, there must be or we wouldn't love those fictional bad boys so much. (Warning for my sensitive readers. The song contains the h word.)