Things I learned at the ANWA conference

The reason I haven't updated this blog lately is not that I wanted to leave the Buy-my-new-romance-novella blog up forever. (Although you should in fact buy it because hey, it's only 99 cents. What can you find at the dollar store that's going to make you happier?)

The ANWA conference was Thursday-Saturday and I was busy--literally--from the moment I woke up (way too early) to the moment I fell exhausted into bed (way too late). Still, it was an AWESOME conference. Here's some of the things I learned:

1) Don't volunteer to introduce James Owen. Instead of reading his bio in the ANWA program, I went off the cuff and told people about him. I ended by saying, "And the best part about James is that even though he's a bestseller, he's still a wonderful guy!"

Which had all sorts of connotations I didn't intend. (Apologies to my other friends who are bestsellers.)

2) Don't volunteer to give James Owen the five-minute-til-class-is-over-sign. James has had an incredible life. He talks convincingly about the power of determination because he's overcome so much. I would like his achievements without all of that 'overcoming' he had to do beforehand. I was so engrossed during his class that I completely forgot to keep track of the time. When the people in the next room suddenly started clapping, I jumped several inches in my chair and hurriedly glanced at the clock on my laptop--which made James think the class was over. He wrapped up and still had five minutes left. It probably worked out for the best though, since so many people wanted to talk to him after class.

3) I work with awesome ladies. A big conference doesn't happen without lots and lots of help. I was so impressed and grateful for everyone who selflessly helped. 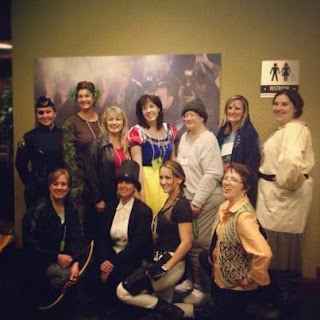 Here we are at the protagonist ball.


4)People who help out at conference win the Beginning of Book contests. The judging was completely blind/anonymous so there was no way anyone could have rigged the winners, but most of the people who won in the various categories of the BOB contest had also helped out at conference in some fashion. Are helpful people more talented? More dedicated to writing? Do you get extra creative blessings if you serve others? I have no idea, but I plan on using this phenomena to recruit helpers for next year's conference. (And Torsha Baker who was in charge of the AV at conference got an agent from the conference. Now don't you want to be on the conference committee?)

5) If I'm going to conduct any part of conference I need sleep beforehand. By the end of conference I was so sleep deprived I was beginning to sound and act like a drunk person. Seriously, when I introduced James for the keynote, I decided I'd better read his bio (see number 1) and I couldn't pronounce the word 'adaptation'. It took me three times to get it right. And did I mention that a film crew was there filming James's speech? I'm really hoping that none of my introduction is left in. 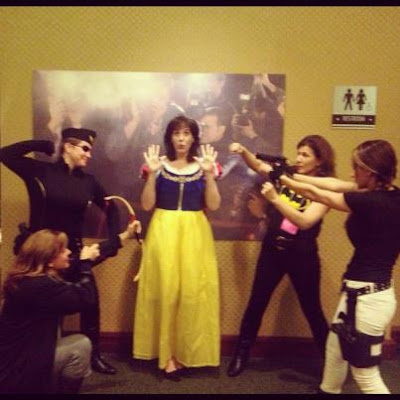 Here I am as Snow White who has wandered into the wrong film.
Posted by Janette Rallison at 2:00 PM 13 comments:

A Longtime Crush for Valentine's Day 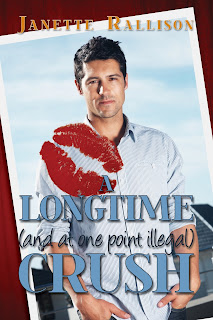 Remember, like, three weeks ago when I said I would be putting up a couple of ebooks in a week? Well, that was proof that I'm overly optimistic about my to-do list. You would think that after living with myself for forty-some years I would know some basic facts:

1) No matter what my intentions at the store, I won't send in the rebate form.
2)  I also won't turn in my receipt to the Boy Scout adviser, Achievement Day adviser, conference committee, or any other place that I'm supposed to turn in a receipt so I can get reimbursed for whatever I just bought for said groups.
3) I won't have just one cookie. I will eat as many as it takes to make me wonder if there should be a reality show about people with no willpower.

And most importantly 4) Everything takes more time than I first thought it would. (This is also why I'm frequently late for things.)

Anyway, my romance novella, A Longtime (and at one point illegal) Crush is finally up at Amazon. (Techno-Bob put it up last night at midnight so it would be available for Valentine's Day, and he made some mistakes, such as putting the parenthesis in the wrong place and putting the author's note where the book description should be. I fixed those this morning, but it will take awhile for Amazon to update.)

It's only 62 pages, but I must say they are good pages. In fact, I sort of have an author crush on Kye--which is entirely inappropriate since I'm about twenty years older than him.


From the day Elsie’s older brother brought his friend Kye McBride to their house, Elsie adored him.  When she was eight she secretly blew kisses to him. When she was twelve she sat on the stairs, unnoticed, and watched him escort another girl to prom. When she was a senior in high school, she walked into math class and found out he was her new math teacher.

With that much emotion fueling her, things were bound to go wrong. And they did. Elsie not only spent her last two weeks of school avoiding him, she turned avoiding-Kye-at-all-costs into her life-long philosophy.

Now three years have passed and Elsie has come home for her brother’s wedding.  She’s got to face Kye –hopefully without getting crushed again.

I would love to see any and all of you at these events! Hope you can make it!
Posted by Janette Rallison at 11:21 PM 5 comments:

Free Book Friday is giving away three copies of Erasing Time on their blog. Plus there's an interview with me and I know you never get tired of hearing what I have to say. For example, you were probably just asking yourself today which fictional character I have a crush on. By the way, if we were basing it just on looks, Matt Bomer who plays Neal Caffrey on White Collar comes quickly to mind. And then insistently stays there.

(I have a theory--based purely on wishful thinking-- that in heaven we will be able to look like anyway we want. I'll frequently look like Cindy Crawford and I'm going to make a request of my husband that every once in awhile he look like Matt Bomer. At least when he's not busy looking like Nathan Fillion, Hugh Jackman, and Richard Hatch. Oh, and some of the time he's got to look like himself too, because he is pretty hot. So if you see two people walking around who look like Matt and Cindy, you'll  know it's me and Techno Bob.)

Anyway, here's the link to the Erasing Time giveaway on Free Book Friday.http://teens.freebookfriday.com/

Posted by Janette Rallison at 10:01 AM No comments:

Send me your address and I'll send you your book, or if you'd rather have an ebook, it should be available this week. Either way, let me know at jrallisonfans at yahoo dot com
Posted by Janette Rallison at 9:35 AM No comments: