I admit there are a lot of things to love about Amazon. It's a great way to find all of those older books that your local book store doesn't carry. But I'm not a big fan of all the used & new books from other sellers that pop up any time you search for an author's books. If you buy one of the 53 used copies that show up on the book's release day, the author doesn't get any royalties from the sale. Plus I'm nearly positive that those copies that appear on the release day are review copies that were sent to reviewers for free. It just seems wrong for reviewers to then turn around and make a buck at the author's expense.

But I didn't mean to blog about that.

Here is the weird thing about those sale prices for books that are out of print. They can get bizarrely expensive. Someone just sent me a link to one of my out of print books, Time Riders.

Now, the problem with this book is that it had no editing done to it. In fact, the publisher inserted mistakes into the text. I never would have let Cedar Fort print the book if I had known this was going to happen, because it is really, really embarrassing. Not only are words missing and occasionally it's unclear who is speaking, but during the story, the date changes by decades. At the climax the heroine's hands are tied behind her back, then she's grasping at her captor's arms, then her hands are mysteriously tied behind her back again.

Yeah, it would have been nice if an editor caught that.

I was glad when the book went out of print.

I wish there was a way I could put a note next to those figures. For 900.00 I would personally read any interested buyer a version without the mistakes.
Posted by Janette Rallison at 10:28 PM 11 comments:

In which Janette begs for romance--wait, will that title get me blocked in filters?

When I was a teenager I used to love to read romances. Seriously, I was a Harlequin addict. I thought men were supposed to be tall, dark, and brooding. Now I have stacks of YA books to read (have to keep current on the genre) and a stack of books my friends have written (because my friends are cool) and, oh yeah, I’m supposed to be writing books not reading them.

Still, I love romance. I miss romance. I don’t read contemporary romances because most of them are hot enough that they singe your eyebrows right off when you read them. But the other day I wanted a nice, mindless romance. A hot guy and witty banter.

A couple of months ago I picked up an inspirational romance. There was plenty of inspiration, a lot of information about the shipping industry, but no discernible romance. I don’t think the characters ever kissed. They just went out and helped the poor then decided to get married at the end.

The next time I picked up a regency romance. (Not yours, Sarah Eden, this was before I got a stash of yours.) I figured it wouldn't be too steamy in the regency era as they had chaperons and what not. (I know, I know, stop laughing at me.)

I’m not sure how steamy it was because I had to stop reading before I got that far. The writing was bad but the writer made up for it by throwing in lots of exclamation points. After saving the heroine from the advances of another man, we read:
The duke’s eyes softened for a moment then regained their habitual gallantry. (Really? Whose point of view are we in? If we’re in hers—and we must be because he can’t see his own eyes, how does she know they’re habitually gallant? She’s just met him.)

And he says, “Indeed I do, fair creature! May I lead you in?”

Fair creature? Did men ever talk that way? I’m imagining my husband coming home from work and saying, “How was the day, fair creature?” Nope. It just doesn’t work in dialogue.

So I figure I can't just pick up any old romance book. I'm either too picky or too prudish for them. Still, eventually I'll be done the sequel to My Fair Godmother. (I'm about 3/4 the way done and I'm supposed to be done by next week.) I'll want a romance. In fact, I'll want many. Tell me your favorite.
Posted by Janette Rallison at 5:34 PM 39 comments:

Nicole, one of my intrepid fans, has asked me a couple of times to mention the plight of manatees in my blog. It isn't really a writing-young-adult-fiction sort of topic, since I have never written or read a book about manatees. (Hmmm . . . that might be a possible plot idea . . .)

So why am I going to do it anyway?

Because I am a sucker for animals. This is easily evident from the pack of stray felines who have taken up residence in my yard, and who I keep feeding even though I know full well that by doing so I have become the neighborhood's token Crazy Cat Lady. I can't help myself. They are furry and cute and stare at me through the glass door, patiently waiting for me to come out with catfood. How can you not feed something that's doing that?

But nobody else ask me to do something like this or my blog will become one long pitch for endangered animals. And we already have that. It's called the National Geographic. My husband insists on a subscription but I hardly read it because it just depresses me. It's like: Gee, which ecosystem is the world destroying this month?

But in the spirit of love for manatees, (who I'm sure would stare at me through my kitchen door if they could) I'm posting Nicole's link and my favorite manatee song. (There are so many to choose from.) If you don't have time to watch the whole thing then just watch from 2:30

Ahh, the wisdom of tomatoes.


http://www.savethemanatee.org/default.html
Posted by Janette Rallison at 8:31 AM 10 comments:

On the eve of the Newbery announcement . . .

This song is for me and all the other authors in the world. Just listen to the words and you'll get what I'm humming to myself . . .

Labels: I wish you were mine

The Wisdom of Authors 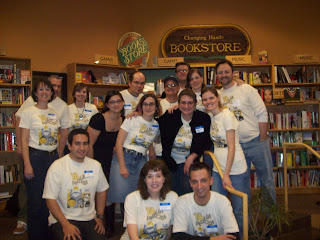 I love hanging out with other writers. It feels so validating. (I'm not crazy, I'm just a writer.) YallaPalooza was lots of fun because I got to meet old friends and new authors--and I also picked up some great quotes I thought I'd pass along to the rest of you who may be inflicted with a writing addiction.

"Every revision, you have to make the guy hotter."--Angela Morrison

"The first two chapters of any first draft generally need to be cut."--Aprilynne Pike

"I've worked out a Ninja Replacement Score for novels. It's basically the number of characters that need to be replaced by ninjas to make the book good."--Janni Lee Simner (I did not ask her what my score was.)

And last but not least on the subject of being an author, Carol Snow said, "It beats having a real job."So true, so true. 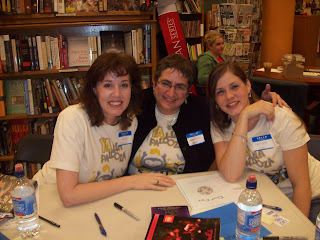 Here's a picture of me, Janni and Aprilynne--the fairy girls.
Posted by Janette Rallison at 11:42 AM 7 comments:

You know how every once in awhile I do an event and then I beg followers to show up so I don't look like a loser? Well, I'm not doing that this time, because I know this event is so cool you'll all willing want to go without me begging. Look at all of the awesome authors that will be converging on Changing Hands next Saturday. (And yes, authors do indeed converge, just like SWAT teams.)


Changing Hands Bookstore and Hoodlums Music and Movies present YAllapalooza 2010, a literary musical extravaganza featuring live bands, pizza, games, prizes, and a chance to mix and mingle with your favorite YA authors and get books signed! We’ll have a live game show that tests contestants’ knowledge of young adult and middle grade literature with games GUARANTEED to amaze and amuse.

Also, those of you who went to Project Book Babe last April will want to read the Book Babe's thank you to the many people who supported her during her cancer treatment. The news is good and she's done with treatment! Yay Faith!

Here is a link to her blog: 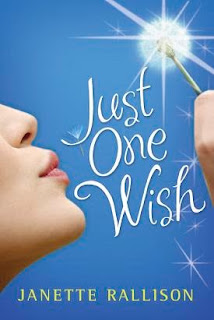 Thanks guys, Just One Wish won the reader's choice for best cover.

I feel oddly popular. Take that, all those girls who were cheerleaders while I was in junior high!
Posted by Janette Rallison at 11:14 PM 18 comments: