It's my favorite day! One of the reasons I love Christmas is that I get to hear from old friends and see how their families are growing. Here are the Christmas cards for this year:

The 2007 picture: I actually like this one of us. Usually at least two of the kids look like they are stunned, blind, or trying to gnaw through invisible rope, but in this picture no one looks horrible--our very own Christmas miracle. Of course my body looks sort of potato-ish, and people who haven't seen me recently might wonder if I have a waist (I do) or worse yet that I'm having another baby (I'm not) but still, I'm happy with the picture. 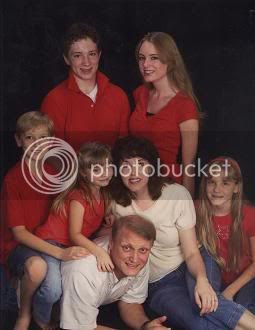 In retrospect, it might have been a mistake to make the kids wear red shirts while being photographed in Target. The slinked through the store afraid someone would mistake them for employees.

Here is the Christmas card I sent to my old college room-mates:

The one I sent to the bow-tied one:

And anyone who needed an angel: I love angels.

The odd things that excite us

I sent my revisions back to my editor. This is a load off my chest--literally, since I've been laying on my bed for days underneath my laptop and half a manuscript. In this wave of revisions I changed the main character's home from Avondale, Arizona to Henderson, Nevada which meant that along with everything else, I had to change the roads they travel and the entire time line. Imagine me yelling questions for my husband to Google:

"Do they have a Toys R Us in Henderson? Hurray! One more thing I don't have to change. Where is the nearest Cancer Hospital? Please, please, please let them have one in Vegas. Yes--I love you, Vegas. Can you get an aerial view of I-15 out of Barstow--do they have bushes growing in the median? They do? Yessss!"

Ah the writer's life and the odd things that excite us.

I've read the manuscript probably seven or eight times now. I used to cry in three places--two of which I'm sure nobody else will cry in. (I will tell you where those places are after the book comes out.) The first two I no longer cry in, but the third . . . still, still, after all of the rereads, I still cry there. And it is still weird for me to try and carry on a normal conversation with my kids, "Yes, you can *sniff* have a cookie" as I'm crying over this scene.

On the plus side even after all these reads, I still love the trailer scene. You will know what I'm talking about when the book comes out--which as it turns out will not be until spring 2009. Doesn't that sound like forever away? They don't even have calendars for 2009 yet. Some people who read my book, may not have been born yet. (Okay, I'm just kidding about that--but that's how it feels.)

Oh well, more time for me to write all of those other things which I never get around to because I'm too busy working on deadlines. And maybe I will even get to finish painting my kitchen. There's another thought that would probably only excite a writer.
Posted by Janette Rallison at 7:19 PM 17 comments:

Is seventeen too young?

I'm still plodding through revision comments. It has taken a long time this time because I have to stop frequently and bang my head against the wall. I also wander into the kitchen and down chocolate in large quantities. Today my editor and I are having a disagreement. This is not unusual, but what is unusual is that our life experiences have taught us completely opposite things about dating.

Here is the situation:

In my book the hero is 19 and has lived on his own for three years. He thinks that the heroine, who is only 17 and in high school is too young for him. (She convinces him otherwise.)

In Janette’s world, college guys rarely dated anyone in high school. I grew up in a small college town and although we sometimes went up to campus or frequented the same restaurants, the college kids at WSU thought that high school students were too young to date. When my friends and I went to hang out at the river, I remember many a guy taking off quickly when he found out we were still in high school. (In fact, this is when I first heard the term, jail bait.)

It became sort of a game for us to not let them know right away that we went to high school because we knew what the end result would be. And really, even if the guys hadn’t thought we were too young, our parents would have. I remember once telling my friend’s college professor father (Almost all of our fathers worked at the university) that we’d met some guys who were taking one of his classes.
I think there was a group of young men who flunked biology simply because I had that conversation with their teacher.

This is not to say that college guys never went out with high school girls, but in all my time in high school I only remember it happening once. And that’s when I went to prom with Devon Felsted. (See, my website, which really, really I’m going to update any day now) But, his family had been friends with mine since before my birth so it wasn’t unusual for us to do things together. I didn’t have a date so it was, as I recall, arranged through our parents at my suggestion. And let me tell you, I was quite the celebrity at school for going out with a college guy. It was that unusual. 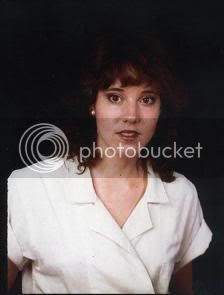 Here is a picture of Janette at 18. (As you can see, she is clearly too young to date college men.)

Next story along the same vein: My husband and I first met at a dance in Virginia when I was eighteen. (He was 21 at the time) It was for college aged students and as I’d graduated from high school a couple of weeks before, I clearly qualified. Yeah, well, when my husband found out how old I was he totally blew me off. I mean really, the conversation was like this:

Really, he didn’t speak to me again for another year. (At nineteen I was apparently old enough to date.) 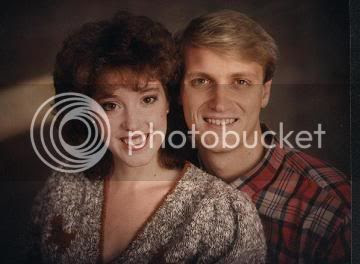 Here is Janette at 19 with college-age fiance (techno-Bob)

Okay, so that is my experience. My editor on the other hand had his first real girlfriend when he was in college (19) and she was 16. According to him, his female assistant, and his female boss, there is no way anyone would think it was odd for a 19 and a 17 year old to go out.

I admit I’m perplexed that we’ve had such completely different life experiences on this one. What is your view?
Posted by Janette Rallison at 3:38 PM 21 comments:

My elementary aged son has been working on a space station. More specifically, his gifted class has been constructing them. Not real ones—in case you’re wondering just how gifted this class is. Today the projects were due and the class took a field trip to talk to people in the industry and show them their space stations.

My first clue that my son is perhaps a bit too much like me: He put my cell phone in his room because one of the kids in his group wanted to call him at 4:30 a.m. to make sure he woke up and made it to the school in time to catch the bus that was leaving at 5:15.

My thought upon hearing this: Hmmm. Is this a new service that peer groups offer? Did he not mention to his schoolmates that he has an alarm clock?

When my husband asked my son if he needed to bring anything for the project, Son answered that no, his group made sure he brought all of his stuff early so he wouldn’t forget it.

My thought: Ohh, it all suddenly makes sense. Apparently he has inherited my concept of time instead of my husband’s.

This is a picture of what my husband, Techno-Bob’s* internal clock looks like. He can even look at the sun and tell you what time it is.

This is more what my internal clock looks like:

I can’t look at the sun at sunset and tell you what direction west is. (Or does the sun set in the east—I never can keep that straight.)

Come to think of it, Son does have a lot of my creativity and he has definitely inherited my husband's math sense. With those two things working together--wow--he's going to go far in life. Well, just as long as someone makes sure to call and wake him up before all those important presentations.


*Not his real name

PS. You can find either of these fine clocks on windandweather.com
Posted by Janette Rallison at 9:48 PM 16 comments: