I'm peeking out of a stack of revisions to go to Kingman this Saturday, April 6th, for the KABAM festival. I'm assuming from the title it will be like a comic book and we will all be saying, POP! WHAM! and KABAM! a lot.

This year, the outdoor poetry slam will be held on the evening of April 5th and the outdoor festival will be all day on April 6th, 2013.

Throughout the week, schools and literacy groups host events to encourage an interest in reading. Events include author visits to local schools and an evening poetry slam. The festival concludes with an outdoor festival in Metcalfe Park in downtown Kingman.

KABAM celebrates our authors, readers, and local businesses by bringing our community together to celebrate the fun and adventure of reading. We hope to see you at KABAM this year!

KAPOW! I hope to see you all there!
Posted by Janette Rallison at 11:24 PM 3 comments:

Things in real life I would never believe in fiction

As a fiction writer, I have to follow rules of believability. My plot and characters' motivations have to make sense. I can't yank the reader out of the story by making him stop, pause, and think, "That would never happen in real life."

The ironic thing about this rule is that generally it doesn't even matter if the thing in question does happen in real life. For example when I wrote Just One Wish, I originally had the cast of a TV show working over Thanksgiving weekend. I'd heard from my Hollywood sources that if a cast is behind schedule, they do indeed work over weekends and holidays. But my beta readers questioned the schedule so I had to change it.

As a writer, the whole truth is stranger than fiction principle can be baffling. People are continuously more stupid then I give them credit for.  Here are a few real life things that make no sense to me.

1) People who willingly go on national television to air their dirty laundry and share the most intimately painful details of their lives.

If I didn't know who my baby's father was, I certainly wouldn't want to advertise this fact. Ditto for my problems in bed, struggling marriage, or my children's behavior that is so unruly I need Super Nanny to expose their flaws and my pitifully inadequate parenting techniques.

How does a person show up for PTA meetings after going on one of these shows?

2) People who record themselves committing crimes and then post the videos on the internet.

On one hand, I've got to applaud these idiots for helping law enforcement to incarcerate them. Carry on, stupid criminal, carry on!

3) Whoever invented and first invested in bottled water.

I am old enough that I remember the time when you had to physically pour water into your own bottle if you wanted bottled water. Really, it's not all that hard. There is only one ingredient to this recipe. So when bottled water first hit the stores, I thought it would be a foolishly short lived idea. I mean, what was the original advertisement for this product? It's just like the stuff you can get from your sink, only more expensive! Who would pay for that?

As it turns out, a lot of people. This is why I will never go into business for  myself. I apparently don't know a good product when I see one.  Although lately I have been toying with the idea of marketing bottled air. It would be a great way to recycle all those used water bottle containers.

4) People who break into cages so they can mingle with carnivorous animals.

If the thing is called a Killer Whale, it is probably a pretty good indication that you should not dive into the tank for a social visit. And despite the fact that baby polar bears look huggable, a two minute search on the internet will let you know that polar bears eat seals. You are about the same weight as a seal and apparently have a close enough resemblance to a gray mammal with flippers that the polar bear is not going to be all that picky about eating you.

And last but not least 5) Road construction projects that take four months. One of the roads near my home is the victim of such a construction project. It makes me wonder what the men in the orange vests are doing on the days they show up--panning for gold? Excavating lost cities?

Fictional characters would never get away with being so slow for no apparent reason--but alas, we live in real life.
Posted by Janette Rallison at 10:30 PM 12 comments:

Despite just experiencing a bumpy airplane ride, I have not fallen off the face of the earth. I haven’t blogged this week because I’ve been busy with school visits, conferences and such. I know you’re all wondering how the Tucson Book Festival went. Remember how I told you that my typical audience for a book reading at the teen tent was an average of, oh, a couple wandering people who wanted to rest their feet for awhile?  Well, you will think I’m a liar when I show you the picture of the audience I had. 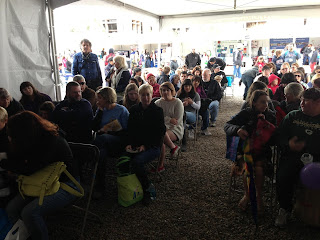 But before you think I’m that cool, I have to admit that most of the audience who came for my reading were there because they knew R.L. Stine was doing his reading after mine and they wanted to make sure they had a seat. Smart people. And a captive audience. So yeah, the reading went really well.

The panel with Bruce Coville and Jennifer Nielsen went great too—except for the Q&A session when my friend, Angela Fox insisted that Hotel California was the greatest song ever written. Pa-lease, Angela. No one has done the Harlem Shake to that song yet.

Mysweater makes me look really fat in this picture. It is a clear sign of how awesome I think Bruce and Jennifer are, that I'm posting it anyway.


After the festival I went to Utah for a week of school visits. Those are always fun because a good author visit makes you feel like a rock star. I am currently at Lady Gaga status. Although no, I will not be donning a bubble dress or raw meat any time soon.


Lastly, I presented at Teen Author Bootcamp. The kids there rocked!


Now I’m back home and I want to sleep for a really long time.
Posted by Janette Rallison at 11:34 PM 10 comments:

I'll be there this Saturday, March 9, and would love to see you. Really. I'm not just saying that because I want something from you. I'm not like those other love-em-and-leave-em authors that have done you wrong so many times. No, I care.

Now don't you want to make the trip out Tucson to see me? Forget the fact that it might be lousy weather. A little rain never stood in the way of true devotion.

I've been reading romances today, so it's hard to be objective.

Anyway, I'm in currently breezy Tucson for the book festival. Close to a jillion authors will descend on the U of A campus Saturday. It will be awesome and literary and totally worth driving all night to get here.

2:30 – 3:15 –Teen and Author Meeting Place South of the College of Education on the Main Mall.
I'll be doing an informal reading and Q&A. These are generally lonely and sparsely attended events where authors ponder their popularity and careers in general.

True story: The last time I was at the Tucson Book Festival doing a reading, I was pleasantly surprised that I actually had quite a few people in the audience. A group of women had come with their daughters. They were attentive and laughed in all the right places. They asked thoughtful questions. Then as I wrapped things up, I asked if anyone had any more questions.

"Yes," one of the mothers replied. "When does Louis Sachar get here?"

Turns out they had come to see him and had gotten the time wrong.

Yeah, so if you're anywhere in the area, please come by.

This will be well attended because it's bound to be really interesting. I will pretend the entire audience has come to see me.

This is when my illusions that the whole audience came to see me will be brutally shattered. Again, if you can come by, buy a book and have me sign it. It doesn't even necessarily have to by my book. I'll happily sign Bruce and Jennifer's books.
Posted by Janette Rallison at 9:01 PM 9 comments:

I admit I don't read all of my Goodread reviews. For one thing, it would be hard to keep up with reviews on twenty books. And besides, there is the author curse to deal with. The curse is this: you can read thirty glowing reviews about your book--and feel so happy--until you get to that one bad review. I know that it's impossible to write a book that everyone on the face of the planet will enjoy. People have different tastes. For example, some people inexplicably like the song Hotel California. 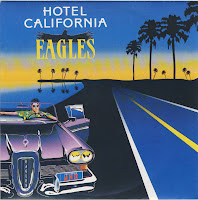 If you aren't familiar with the song Hotel California consider yourself fortunate. It is a slow ballad about a hotel that traps people inside. There is stabbing going on. I remember hearing once that the song was inspired by the movie Psycho. When it comes on the radio, I literally leap over furniture so that I can turn the station two seconds faster.

Anyway, so authors expect bad reviews. I shrug off most, but every once in awhile there is one that bugs me because it gets the facts wrong and then the reviewer states that s/he didn't like the book because of those facts. I know authors who have gotten bad review for books they didn't write. I once got a bad review for a book that I hadn't finished writing yet. (Apparent the reviewer had psychic powers.)

Sometimes I read reviews though and I had to say that I loved this review of A Longtime (and at one point illegal) Crush. I won't quote the whole thing because that would look like shameless self-promotion. I will say that the reviewer is brilliant and astute and right about all the nice things she said about me.

You know how (Janette Rallison) seems to create the most awkward, embarrassing, yet down right hilarious teenage moments in all of her books? (If you don't, read some and you'll see.) Well my friends and I have what we like to call "Janette Rallison moments". It's where we have the most humiliating experiences that are mortifying at first, but then we have a giggle fest later on about it. Like the time when one of my friends got their braces stuck to her crushes shirt. Yeah. Definitely Janette Rallison moment.

The latest, completely true moment that happened to me:
Imagine you are at a place where you are surrounded by people who are all dressed up. You are dressed up too. It is close quarters. You reach into your purse to pull out something you need--something that everyone is expecting you to have. It is at this point you realize that the bad smell you've been getting whiffs of all evening originates from your purse. Apparently one of your evil cats has recently crawled into your purse and peed inside. 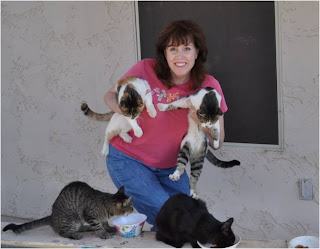 (Here I am with the likely suspects.)
There is not a gracious way to get out of this sort of situation. And unfortunately, randomly screaming in close quarters is still not socially acceptable. That Janette Rallison moment will probably find its way into a book someday.
Posted by Janette Rallison at 10:11 PM 11 comments: